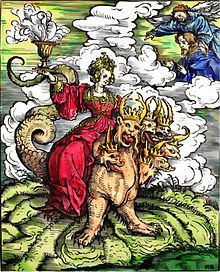 Israel, being entrusted with the gospel (Deuteronomy 29-30), eventually fell becoming a den of thieves, a brood of vipers and sons of Satan. So, too, Mystery Babylon. Once having the ingredients of godliness, Mystery Babylon became godless. She, this not so mysterious Babylon, rejected her God given purpose as outlined in her constitution, and became satanic to the core.

For this reason the elect are called to, ” Come out of her my people.”  We are called not to move physically but to mentally and consciously disassociate from this mystery Babylon. Do not do what She does.

Abraham was visited by God when he dwelled in a tent with Sarah. Lot, his nephew, was seen in the Gates of Sodom. This shows the contrast to “come out” of the same way; “Lest you partake of her sins and receive of her judgments.” Lot and his family were told to depart from the valley and go to the hills. As are we, figuratively speaking. Being called away from the lower level carnal reasoning which gives us reasons and excuses for handouts and freebies society has to offer. Conversely, Abram said, “I lift my hands to the Lord God possessor of Heaven and Earth that I will take neither a stitch of clothing or a shoe strap from you lest you say you made me rich.”

“My people, Come out from among them
and be separate, says the Lord.
Do not touch what is unclean,
and I will receive you.”
18 “I will be a Father to you,
and you shall be My sons and daughters,
says the Lord Almighty.”

7 Therefore, having these promises, beloved, let us cleanse ourselves from all filthiness of the flesh and spirit, perfecting holiness in the fear of God.”

We have been called to be distinctively different. In the world, but not of the world. To clothe ourselves in our heavenly attire and be found “in Christ.”

3 But fornication (with the Harlot) and all uncleanliness or covetousness, let it not even be named among you, as is fitting for saints; 4 neither filthiness, nor foolish talking, nor coarse jesting, which are not fitting, but rather giving of thanks. 5 For [a]this you know, that no fornicator, unclean person, nor covetous man, who is an idolater, has any inheritance in the kingdom of Christ and God. 6 Let no one deceive you (or steal your reward) with empty words, for because of these things the wrath of God comes upon the sons of disobedience. 7 Therefore do not be partakers with them.

8 For you were once darkness, but now you are light in the Lord. Walk as children of light 9 (for the fruit of the [b]Spirit is in all goodness, righteousness, and truth), 10 finding out what is acceptable to the Lord. 11 And have no fellowship with the unfruitful works of darkness, but rather [c]expose them. 12 For it is shameful even to speak of those things which are done by them in secret. 13 But all things that are [d]exposed are made manifest by the light, for whatever makes manifest is light. 14 Therefore He says:

“Awake, you who sleep,
Arise from the dead,
And Christ will give you light.”

And so He does.

The Kingdom of God is at hand, as much as ever.